The world’s only floating nuclear power plant (FNPP), Akademik Lomonosov, commenced commercial operation on 22 May 2020. Thirty nine days later, on 30 June, the FNPP started providing heat in addition to electricity to remote Russian communities in the Chukotka region on the East Siberian Sea.

The unique FNPP is moored in the port town of Pevek, and will replace the ageing Chaunsk coal-fired power plant – saving about 50,000 tonnes of CO2 emissions per year, compared to current levels.

The floating power unit (FPU) is designed for an operational life cycle of 40 years (with a possible extension). After decommissioning, the FPU will be towed to a special deconstruction and recycling facility.

SMRs offer an excellent option for countries looking for flexible and safe reactors while maintaining the high level of electricity production generated by large nuclear power plants (NPPs). Equipped with pioneering post-Fukushima safety technology, offering flexibility in both installation and construction, and capable of producing electricity up to 300MWe per module, SMRs are gathering global interest.

Beyond energy, SMRs can be used in a variety of applications, including hydrogen production, desalination and heating. If developed, these projects will provide not only energy but also heat at a favourable price compared to other sources. This is already the case with the FNPP in Pevek.

The nascent technology, however, means that – as with any first-of-a-kind project – costs may be higher in both licensing and construction. In licensing, appropriating regulations (historically designed for large NPPs) for the new SMR designs takes significant time and money. As for construction, large-scale production is necessary to see a cost benefit – but it will take some years for the industry to run a series of reactors in a ‘fleet’ approach.

The first player to harness and successfully operate an SMR-type design will, therefore, have a huge advantage over other competitors in the market. The International Atomic Energy Agency reports that, globally, there are about 50 SMR designs at different stages of development. The first of these to succeed in SMR series construction could be the first to meet the demands in remote and isolated locations such as islands or offshore territories where a conventional reactor is not feasible, as well as large operating and under-construction facilities – especially within the mining industry. In this regard, FNPP Akademik Lomonosov marks a significant milestone for Rosatom.

Rosatom’s latest SMR technology is the RITM-series . The advanced pressurised-water reactor incorporates all the best features from its ship reactor predecessor, the KLT-40S. With an electrical capacity of 50MW, a fuel cycle of up to 10 years and a design life of 60 years, the reactor can be installed in both floating and land-based facilities, giving Russia’s hardest-to-reach landlocked industries and communities access to secure sustainable energy.

Rosatom is now considering several locations to deploy land-based RITM-series SMR NPPs from Ural to the Chukotka region, in order to safely provide electricity to large mining and processing facilities, as well as the local population.
The RITM-series SMRs will have three key applications: land-based NPPs, floating NPPs and new universal icebreakers. Through this, Rosatom will secure enough demand to manufacture SMRs in series, which will drive down costs and lead times and make the technology more attractive to foreign markets.

Our findings conclude that on average in Russia, around 400 jobs per unit can be created per year during the whole construction period. This peaks at more than 800 jobs per unit. Maintaining a steady hiring flow during operation will create 60 jobs per unit.
Based on our implemented large-scale NPP projects, localisation levels can reach 20% and beyond, depending on the specifics of each market.

As SMR development gains momentum globally, we look forward to cooperating with many international companies. We will keep an open mind throughout this process, with the view to finding the best partner for us in the market – for which the UK may be a great candidate.

The RITM-series is a light water nuclear reactor. It has a dual circuit with four steam generators integrated into the body. These are housed separately and connected to the reactor by primary coolant pipelines. The layout reduces the installation’s material consumption and size, reduces the risk of leaks from the primary reactor loop, and facilitates installation and dismantling. Four main circulation pumpsare located around the vessel.
The reactor will have a thermal capacity of 175MW and an electrical output of 50MWe. It uses uranium fuel enriched to 20%, with a fuel load every 10 years. The design makes it two times lighter, more compact and has 30% more electrical capacity  than the KLT-type reactors used on the Akademik Lomonosov floating NPP.

Printed version of the article in Energy Focus Magazine,Summer 2020, issued by the Energy Industries Council: 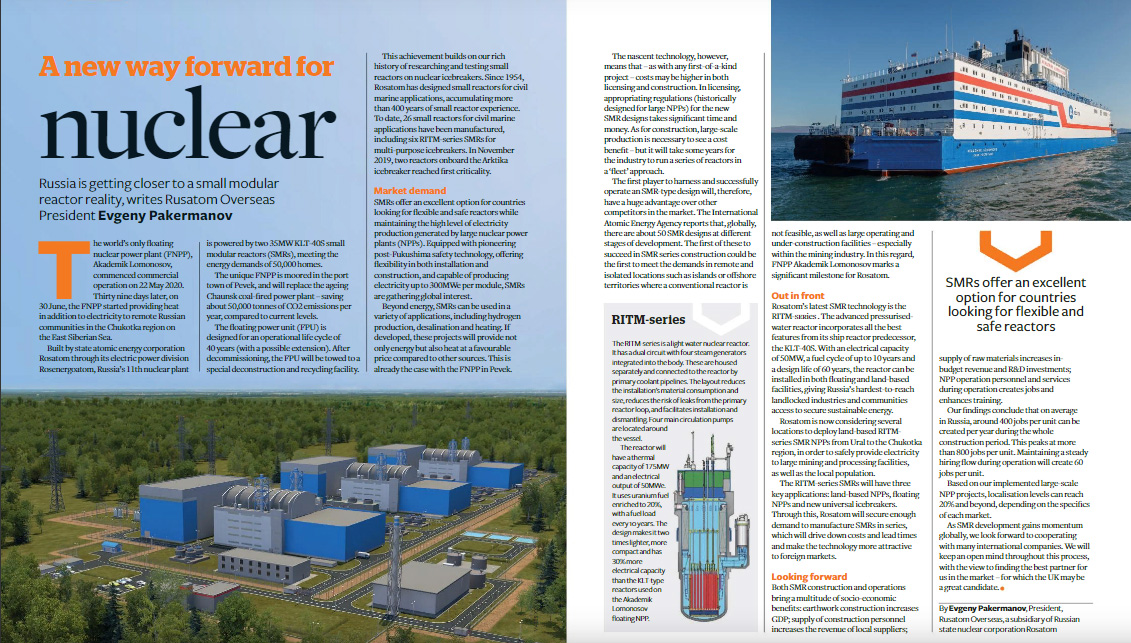